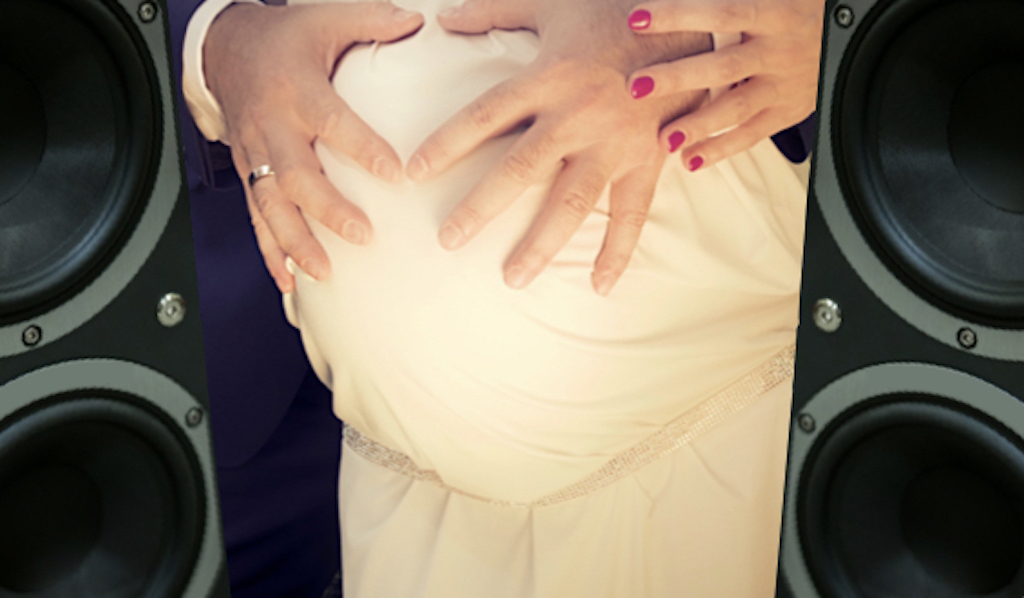 Some studies indicate that, if you play music to the unborn babies, they can hear and even react to the sound by moving or with the rhythm of their breathing.

Research and specialists make us believe, music is good for the unborn

For older kids, 3 to 4 years old, specialists say that if they attend for example piano lessons they may enhance their spatial reasoning skills (the ability to understand three dimensional space). California obstetrician Rene Van de Carr, who wrote While You’re Expecting…Your Own Prenatal Classroom, says he’s observed a 33-week-old fetus pattern his breathing to the beat of Beethoven’s Fifth Symphony. Because the fetus followed the rhythm of the symphony, it’s obvious he learned something about the rhythm and enjoyed it.

European research in 2013 showed that exposing an unborn baby to music can have a long-term effect on their brain (see ref. 7). They found that newborn babies could remember a version of ‘Twinkle, Twinkle Little Star’ played to them in the womb. When alternative versions were played, the babies responded differently.

Other studies have shown that babies are born with the innate ability to detect musical beats (see ref. 8). Some research suggests that soothing music may encourage premature babies to eat, and could improve their vital signs like heart rate and O2 saturation levels (see ref. 9).

“When a woman relaxes, that’s good for the fetus and that’s an indirect effect of music on the fetus,” says DiPietro. You can put on some tunes, kick up your heels, or dance around and have fun.

If, after listening to music throughout your pregnancy, you happen to give birth to the next Adele or Wynton Marsalis, even better.

If you choose to play music to your unborn baby or later on to your kids, we recommend not to pump up the volume on your stereo higher than 65dB – just about as loud as background music at a store – or even less, if you play it for prolonged periods.

Parents that decide to regularly play music to their unborn babies, do this on purpose. They want to make the babies comfortable with music, have them learn to know music, make them enjoy music and probably make them develop some early skills by listening to music.

Don’t you think that in this case the music should be played back with a good quality? Why would you choose a Mozart or Tchaikovsky high quality classical music, if it is not correctly played back by your music system?

Playing back music to babies or kids  is often being done with kid’s toy players. In the earlier days those were kids’ cassette players, nowadays it is more toys with music stored on integrated chips.

Babies should listen to HiFi at lower volumes

If you believe, babies could develop some skills by listening to good music, they should receive that music at least complete and correct, i.e. HiFi.

That’s what HiFi is about, the faithful, trustful reproduction of the recorded music.

HiFi at lower volumes is as difficult, if not more difficult, than at higher volumes. Often, we choose smaller and cheaper systems to play music for our kid’s and think it is good enough for them. But if they should develop early skills by listening to that music, and if we pay the music in bad quality, don’t we educate them badly?

HiFi systems should at least have a frequency range that is about complete and uncolored between low and high frequencies. They should not dramatically distort the music and they should be stereo. Only systems that meet these minimum criteria would playback a piece of good classical music well enough to not mislead your unborn baby.

How do you know if your system is compliant with the minimum HiFi criteria?

Check the system with the TestHiFi App, it will let you know with a simple traffic light rating, if it complies (green), almost complies (amber) or not complies (red) with the minimum HiFi criteria.

Some reference on the topic: