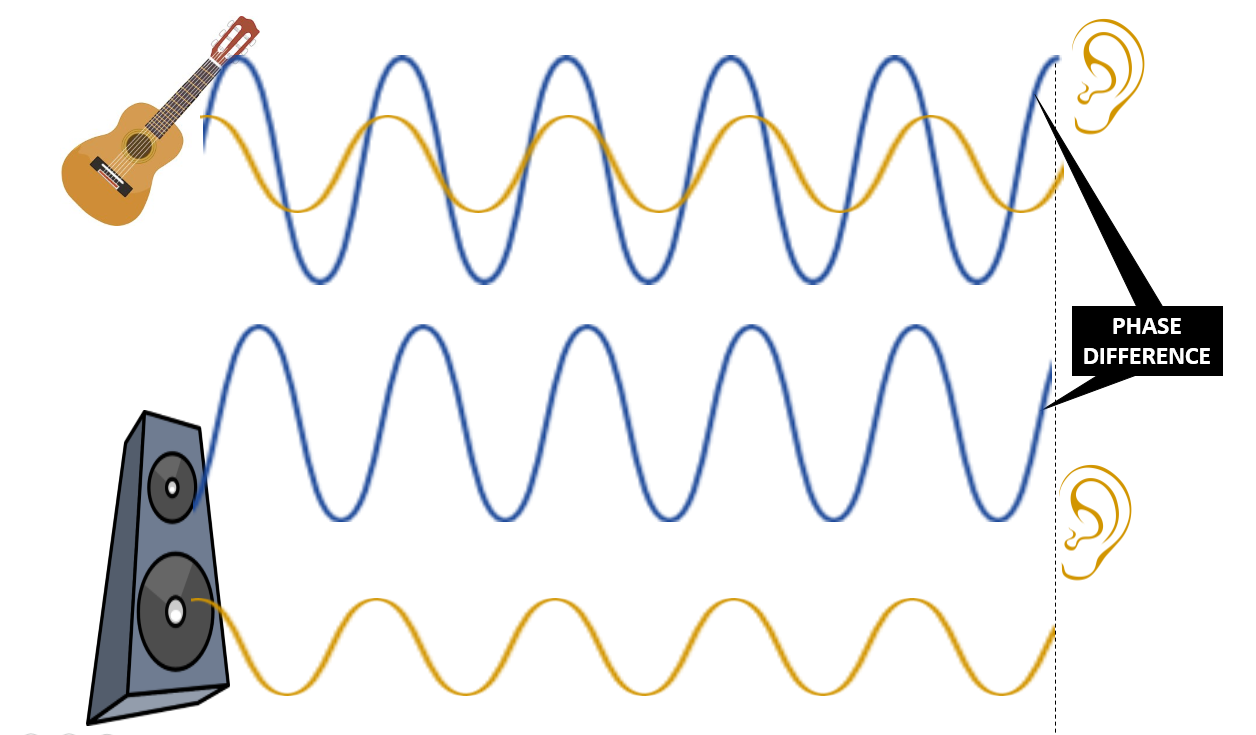 This blog adds to the wide topic of how we localizes sound and what a HiFi system should be capable of. The earlier blog “ghost fundamental and engaging sound” talked about this and this blog continues that talk.

Why would we listen to stereo audio systems and not just to mono systems? When listening to a live performance, we experience the variety of instruments and musicians’ positions. However, if we would not be able to localize the onset of sound, would it make a difference?

To some it might be clear, however some others might not be very familiar with the science around stage layouts. There are lots of empiric reasons and sound physics reason for the positioning of instruments and musicians with a specific stage layout. Especially with respect to how the different sounds, timbres and as such the harmonics play together is important for the overall sound.

Norman Del Mar’s book on orchestration recommends never putting the horns directly in front of the timpani, because the two sets of harmonics interfere with one another.

Thomas Goss explains the difficulty of saxophones placement in the orchestra.

James Bennett cites Courtney Lewis who gives a brief explanation for why the musicians sit where they do. (has some nice videos as well)

There is a whole orchestration science which works on how best positioning the instruments and musicians on a stage and how to compose based on this positioning.

With so much effort put into and composing based on stage layouts localizing onset of sound is an important part of the artists intention. Fair and correct playback as such reproduces also localization information of sound. A minimum requirement for HiFi therefore is stereo.

Mono sound is effected by room influences as well

Sure, stereo effects can be influenced by the ambience. Especially localization of a sound stage depends on stereo capabilities. However, listening to a mono audio system is not immune to ambience influence. Room reflections and damping influences the frequency band we receive from a speaker. A speaker might produce a certain frequency, as intended by the artist. The speaker radiates the frequency into the room and at some point, it arrives at the listening position. Reflections of that frequency arrive at the listening position with a different timing respectively phasing.

It is not only in rare cases, that the combination of direct and reflected frequencies, due to their phase inverting, eliminate each other. Although the speaker reproduced the sound correctly, we cannot properly hear it. You might think this is quite unusual. That is true, complete elimination is far less usual than partial elimination, which is about always the case at least for some lower frequencies.

Listening is more important than measurement

Now for those of you who strongly believe in own listening experience being much more relevant than others measurement. I do not want to debate about listening versus measuring as both are important. However, here is some listening example to experience sound localization with stereo, mono sum and one channel only.

Best would be three listening stages. First, we listen with both headphones, second with one side only and third with a one case-only speaker, like a typical Bluetooth or wireless speaker. The latter is used for listening to a mono sum, i.e. one speaker delivering both left and right channel.

I recommend to listen to either of the two parts of music. Both parts are rather short, but good for this experiment. Way Out West by Sonny Rollins starting at 5:00; Thriller by Michael Jackson the first 20 seconds.

Some listening experience on how we localize sound

Listen with both headphones Way Out West, starting at 5:00 you will hear the saxophone on the left channel. At about 5:10 you will quite well recognize the movement of the saxophone.

Thriller starts with a door that opens, followed by food steps from right through the middle to the left. I found it to be very interesting, the door opening is mixed to the recording, in a way that you can hardly localize it. Whereas the food steps are clearly walking from right to left.

Now listen to both with only the right channel headphone. We experience the localization as much more difficult. It rather sounds changing between far and near than left and right.

The third stage of our experiment, listening to a mono speaker that delivers both channels by only one speaker (case) will give a listening experience somehow in the middle of the headphone experiences. It is a bid easier to localize than with only one headphone, but clearly not as good as with the stereo headphone example.

Influencing as well is time and phase

Reflections often overlay with the direct sound and due to their time and phase variance relative to the direct sound’s time and phase, partial elimination takes place. Multi-way speakers sometimes have time and phase inconsistency between their tweeter, midrange and or bass speakers. In rare cases, there can be odd effects in wide overlapping cross over frequency ranges. More important, for instruments where the fundamental and its harmonics reach over a crossover range, part of the harmonics might be time and phase incorrect relative to the fundamental and some lower order harmonics.

Insignia HiFi has a very good article on phase coherence, where I borrowed the title picture from. Phase not coherent: This leads to not less than a collateral damage to the way we perceive music or to the way we are supposed to. This alters the TIMBRE & Localization (explained later) of the sound.

The sound system as a black box

Take the whole audio replaying system as a black box. There is a recording of any kind. And there is an output of the black box, that we can listening to. Such a black box would replay the recording in HiFi quality only by replaying the sound of the recording without negatively influencing it.

There are some minimum criteria to HiFi. A HiFi system does not alter levels of certain frequencies only. Nor does it change time or phase. It does not add significantly distortions and it replays with a minimum loudness on both channels. Such a black box could only play back what it would get as an input. Garbage in – garbage out. If the system replays with HiFi quality this would be exactly true and the black box would not try to manipulate the sound to any better than it comes from the source. There is a reason for not manipulating the sound. For good sources we expect: HiFi in – HiFi out. That is true only if the black box does not manipulate. And finally, we only have a chance to receive the artists intended sound if there is no manipulation by the black box.