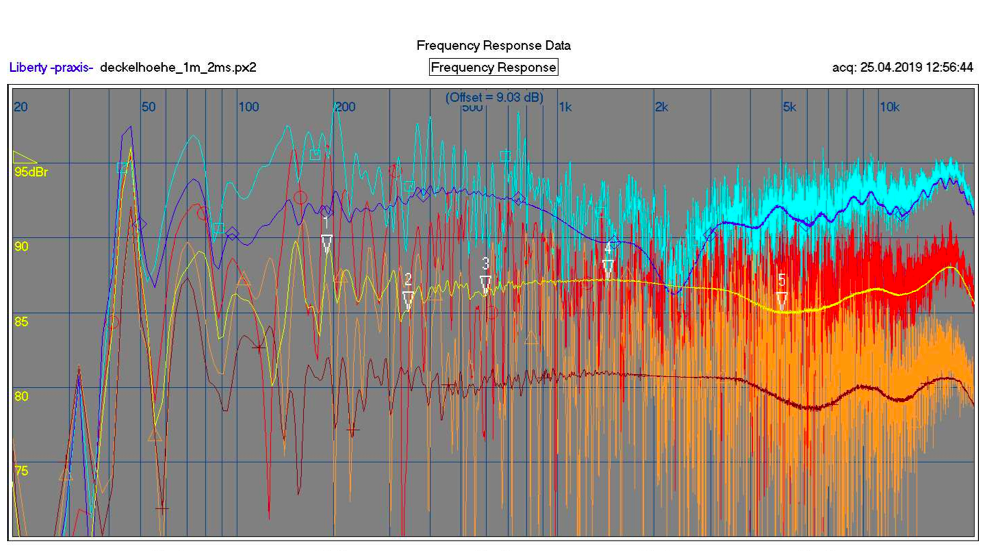 I would like to continue from last time, discussing measured data at various distances. Including some nearfield effects. Loudspeaker, room and placement remain the same, the time response has been shown last time.

For some basics about loudspeaker measurement, please see my introduction blog.

The loudspeaker looks like this (shown with mic placed for nearfield woofer measurement): 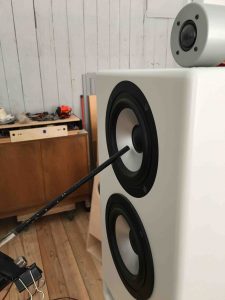 The largest speaker radiating dimension is 38 cm vertical. Therefore, in-phase addition of all radiating parts will start around 3-5 times this distance, at about 1.2 – 2 m.

To see some nearfield effects, the picture on top overlays the 1 m measuremend with two more, at 50 cm and 2 m in front of the speaker, and similar height:

As expected according to the acoustic formula below, average anechoic SPL decreases around 6 dB per distance double:

But the response curve at 50 cm deviates strongly! Why?

Since we want to measure the loudspeaker, not the room, it is desirable to put the mic close to the speaker. More direct sound, less room sound. As last time, the picture on top shows the effect of 2 different time windows: The 100 ms windowed „room response“ compared to the 2 ms „direct sound“.
We can see less room influence at 50 cm compared to 1 and 2 m measuring distance.

But: we cannot get closer to all three radiators of our example loudspeaker in similar ways at the same time. We can eg. move towards the tweeter, but end up being closer to it than to the woofers.

Therefore, at 50 cm the sound from three different radiators (one tweeter, two woofers) arrives at different times. This causes phase issures, the pressure of all three sources doesn’t add up perfectly.

In our example, the microphone was kept near tweeter height. The lowest woofer output arrives later than the upper one. Due to that phase shift their sum is about 6 dB lower near the top of their bandwidth (2.3 kHz). Also, this sub-optimal summed output is late compared to the tweeter’s. Which again produces a phase lag, and the total sum shows a wide and 7 dB deep notch around the crossover frequency.

If we lower the mic height just 5 cm towards the woofers, at the height of the upper woofers upper edge, the combined output looks much better: 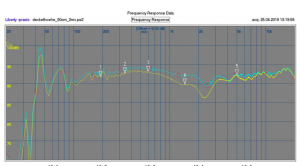 Still, there is a wide-bandwidth lag around 2.3 kHz. Therefore, we offer a nearfield correction ring to be placed between lower woofer and the cabinet to perfectly time align it for such situations. In the basic configuration the lower woofer is mounted 4.5 mm forward to the upper one, to produce flat response at 1.5 m distance.

Obviously, even at 50 cm distance we measure too much room contribution to show the speaker output. If we move the microphone within 6-15 mm distance to a woofer (as shown in the loudspeaker photo), we pick up pure direct sound. That can be re-calculated into quasi 1 m output.

But such a close-up nearfield measurement again has it’s problems. The graph below shows that „proper scaled“ (assuming half-space LF conditions) measurement compared to 1 m distance: 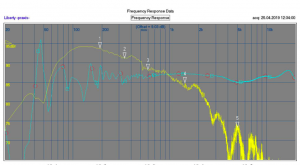 Those two clearly do not align at LF’s! Either the nearfield measurement was scaled too high or the 1 m measurement too low. Actually, both in this case. Speaker sensitivity is 88 dB / m / 2.83 V. Half space assumptions would produce a 6 dB LF peak with the nearfield correction formula. If the speaker measures flat in non-reflective environments.

If we correct for those deviations, we can splice the two curves somewhere around 300 Hz and finally produce a nice, nearly „true“ anechoic full-range response at 1 m distance.

Not shown, and missing in the picture, is the reflex port output. We can see that the 1 m response does have SPL below 60 Hz. Boosted by a 48 Hz room resonance, and below cut by a room-null. But most of that sound comes out of the loudspeakers two bass reflex ports. And is not picked up by our woofer measurement.
We can include that port output from close-up nearfield measurements. But then things become more complex again, involving different radiating areas, with distance and phase effects.

The complexity of Loudspeaker SPL measurements was one reason to create the TestHiFi app. In order to make it easier to measure and interpret results regarding the reproduction quality of audio systems. Of course, many more aspects of performance are covered. Like distortion, and SPL limits. A well balanced frequency response is only one little, but important quality.

I intend to cover how to measure at the listening position, without caring about loudspeakers and time-windowing, next time.

Do measurements correlate with listening experience at all?

Why could a bad speaker be measured as good at the listening position?