What are SETs? Short for Single Ended Tube, or more specific, Triode Amplifier. My favorite kind of amplification!

The inherent problem of those amplifiers is very low power efficiency. 100 W of input may deliver only 10 W of output power. Most often, even less.

I have been struggling with SETs for decades before finding some that really fulfill the promise of „perfect“ sound. Triggered by hearing very „musical“ sounding amplifiers here and there it took long to find one that produces that clear and artifact-free sound I wanted. Without weak bass, dynamic constrain and loss of detail.

Why all that fuss about tube amplifiers?

Now that I listen with single ended tube amplifiers I may state that it indeed delivers what is said about SE tube amps: clarity, definition and dynamic of musical instruments sound is outstanding.
Simple example: Never before could I understand the spoken word within a dense mix as easily as now.
Never has the musical contrast been so high.

But only with a really GOOD tube amp! And only if it is driving a loudspeaker that fits the concept.

Below, I provide a short overview about the most common problems I found.
I will not look into room acoustics, where highly damped rooms may consume much more acoustical power than modern living rooms. And consider one channel of sound only, stereo produces around 3 dB more output.
What I mention is my personal guideline only, your demands may deviate significantly!

HiFi amplifiers are usually considered to be „voltage sources“. Such a source has low „output resistance“. It delivers the same voltage into any load impedance. Regular loudspeakers are often said to have „8 ohms“ impedance. Ohms law shows that at 2.83 V such a load would draw 2.83 / 8 = 354 mA of current. Multiply voltage and current to calculate the power: 2.83 * 0.354 = 1 Watt is consumed by the loudspeaker.

Real amplifiers are not that stable into different load impedance. Especially tubes have higher output impedance, SETs typically several ohms. If we ask them to deliver more current, the output voltage sags.

See what happens to an ideal loudspeaker with perfectly constant frequency behaviour. It reproduces all frequencies with the same level (not that I have ever seen such perfect response). But, allow for a real world IMPEDANCE of the loudspeaker, attached to an SET amplifier with it’s own 3 ohms output impedance. 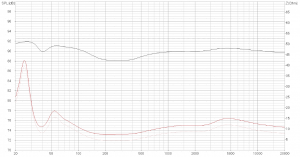 So remember, if you use a high output impedance amplifier, the sound of your speakers will change for sure. Compared to a solid state amp with output impedance of 0.1 ohm or less. It is not the amplifier that changes the sound, but it’s relationship with loudspeaker impedance. A deviation of several dB over a wide frequency range can certainly be heard! May be to the better, maybe sounding worse.

This is one reason why it is nice to provide loudspeakers with relatively constant impedance for tube amplifier use.

The first and most obvious problem is the low output power of SET amplifiers.
To specify their power they are often categorized in terms of output tubes.
There are the „flee powered“ amplifiers which can output between 0.5 – 1 W, using a single
45 or similar types in the output stage. 3 dB more power is delivered by 2A3 and similar output tubes. Above that the 300B tube defines the archetypical SET amplifier with around 6 watts of power. Upwards from 10 W it typically gets expensive. Tubes like 211 as used in the legendary Kondo Ongaku and achieve 15W or more per channel.

Most people interested in tube amplifiers are aware that 1 W is not enough to drive regular hifi loudspeakers. In best case, averaging about 86 dB / 1m sensitivity these speakers would radiate just 86 dB of music into our room. Which is a nice average loudness, but leaves no headroom for musical peaks.

So with HiFi loudspeakers of 86 dB sensitivity how much power would be desirable?
Please see our „decibel“ blog for reference if you are not familiar with that term:
I would suggest at least good and stable 20 W per channel, or more. To provide headroom for peak music levels. Remember: If 1 W achieves 86 dB, 20 W produces 86+13=99 dB. And 100 watts produce 106 dB (which is pretty loud). Peaks of real orchestras, trained singers and close-up grand pianos reach up to 110 dB and more. (Please remember again, such high levels are NOT healthy for our hearing.)
So let us say we want at least 100 dB with some distortion to be achieved by our music system. Per channel.

Real world systems may even achieve less than that. Why?

Especially those manufacturers who aim at the tube amplifier niche tend to overstate the sensitivity specs of their products. Examples like a specified figure of 96 dB that Stereophile magazine tests to 92 dB are not uncommon.

Add to that another issue: sensitivity is not equivalent to efficiency. Sensitivity states loudspeaker SPL at 2.83 V input, which would be equivalent to 1 W into 8 ohms. But most loudspeakers have lower impedance, around 4-6 ohms or lower. A 4 ohms load draws 2 W of power from 2.83 V, if the amplifier can deliver the current.

Back to the claimed „96 dB“ loudspeaker, which has a real sensitivity of 92 dB. It also has a minimum impedance of about 4 ohms. Therefore, it needs 2 W to produce those 92 dB, or delivers 89 dB at 1 W.
IF the impedance does not vary too much.

Short calculation: For 96 dB output this loudspeaker’s datasheet lets us believe 1 W of power would be enough. However, the real world figure would be similar to 89 dB at 1 W, or 5 times as much power for 96 dB!

I other words: If you assume satisfying sound with a 2A3 type SET amplifier, you now realize the need for a 211 category type instead. Which, at similar build and sound quality, might change the cost significantly.

You may often hear the claim that especially SE tube amplifiers deliver subjectively more power than specified. To some degree this is true, as compared to push-pull transistor designs. Tubes run at very high voltages and behave well even if carrying much more power than specified. They do not radically clip the signal at too high levels, but start to distort gradually with increasing output level.

But, sometimes due to design constrictions (like gain versa complexity considerations) may lead to a design where not the power tube limits the output. Instead, the input tube’s grid may be overdriven.

Therefore, depending on design choices for example not all 2A3 SET amplifiers will sound equally powerful!

See what happens if we increase the output of one of my amplifiers from about 8 mW to 2 W (+24 dB).
Shown is a sloppy SMPT IMD plot – no lab grad measurement, but a quick shot. Still shows the effect. We send a 2-tone input signal of 60 Hz and 7 kHz into the amplifier. And hope for a clean, amplified 60 Hz and 7 kHz output signal. 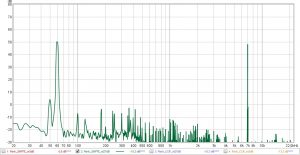 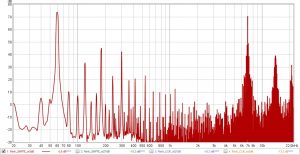 The output is NOT clean, even at the lower level. To some part due to the sloppy measurement setup, to some part due to the amplifier. But at the higher level it produces much more and higher level distortion components! The amplifier is significantly overloaded. In this case, the ECC83 input tube’s grid is saturated and the distortion onset is quite steep. While the output tube could produce 7 W easily, the input stage is not able to produce adequate levels do drive it higher then to 2 W output. IMD distortion rises from below 0.5 to 12 %

Still, driving speakers of 92 dB sensitivity with low impedance variation this amplifier satisfies nearly all my needs. Listening at 82-85 dB average, it allows for 10 dB peaks with acceptable distortion. Soon, my horn speakers will be back, with 96 dB sensitivity and even higher impedance. That will deliver the loudest peaks without distortion.

The amplifier needs around 110 W of constant input power. I sometimes use a chip amplifier that runs with 2 W average power consumption. But the sound quality is significantly lower. Since I need to listen to music a lot at work, I tend not to listen to music for pleasure if not in the mood. Therefore, if I do it, I want MAXIMUM pleasure! Compared to a large TV screen those 150 W needed by my music system is ok for me, and listening to good music is at least as rewarding as a good film.

Also, many typical solid state HiFi power amplifiers draw around 40 or more watt to „wake up“ those low sensitivity loudspeakers. I know the difference in sound: no way back for me.