Back to a friend and customer’s place I had a strange experience which I would like to share. And still don’t quite understand …

is complex and very high quality :
The signal from diverse sources is (in digital form) sent to a powerful PC.
On that PC reigns Acourate – a digital tool with many functions. It serves both as digital crossover and room correction device. Working in the digital domain, it allows for very complex and geometrically different speaker systems to be filtered and time aligned easily. 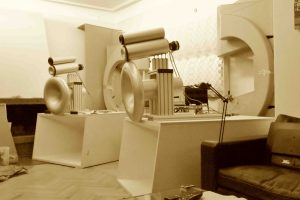 Digital converters play a critical role here, since we not only need a multichannel DAC to convert the signal for every part of the multiway-speaker separately but also convert the turntable’s analog output to digital. 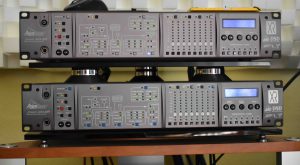 I contributed a the pair of large basshorns first, 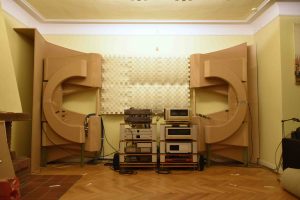 and low-midrange horns to the setup later.
Which allowed me to listen to various steps of evolution.

While the digital c/o can provide extremely steep filters, the owner finally settled on something I also prefer with my own purely analog loudspeaker designs:
Low order crossovers. If I remember correctly, he uses mostly second order filtering.

Also, he now tries to use as little EQ of the individual drivers as possible.

The change from steep and elaborate filters to lower order with less EQ plus using Nelson Pass SIT-3 amps now are the changes since my precious visit.
That previous visit I shortly described in another blog (LINK).
Where I mentioned a certain „pressure on the ear“ feeling while listening.

Now, that has feeling has gone completely. For the first time I can listen without fatigue and enjoy the super low distortion and high resolution of the system!

Interestingly, there still seems to be a certain „diffuse“ component to the sound, which feels to me as if being produced by some time or phase issues between the various drivers. Of course everything is time aligned, and maybe I am just wrong.

As mentioned in another blog, it takes time to adjust to a system to evaluate on such high quality level. Time I didn’t have.

One thing is for sure – the improvements of lower order filtering and better amps are obvious.

Late that evening my host mentioned we should have a listen to the analog front end.
Since the signal processing is digital, I wouldn’t have cared. But he was slightly insistant, and I grew curious …

And what a surprise:
Once the vinyl was on – that „diffuse“ quality of the sound seemed strongly reduced! 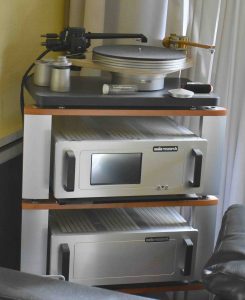 It was even more fun to listen to vinyl than to files of the same music.

THAT is of course absurd, isn’t it?
It was late, we uttered a few words about distortion, enjoyed more music and went to bed. Yes, and he also prefers the analog front end! Are we distortion junkys?