Critical setups with too much difference in signal length between sent and recorded signal, might influence pitch of the music and disable for time and phase related TestHiFi measurements.

The indicated result shows the difference between sent and recorded TestHiFi test signal length in percentage and milli seconds. Positive values indicate the recorded test signal being longer than the sent test signal.

Keeping manly all other influencing parameters unchanged, a change in track length effects the pitch of the music. This effect can impact the sound quality, although only in rather Rare cases critically. However in some cases, especially when using a bluetooth connection, it is very hearable at the beginning of a music track.

The difference of signal length between the source signal and the recorded signal can be caused by various mostly digital effects. Those more usual effects might be cutoffs, interrupts or compressions. Rather unusual effects can be caused by the signal processing of wireless connections. Such effects can be elongation, a slowdown of the playback. While a continuing consistent elongation during the whole playback would consistently reduce the pitch of the music, a shortening, an accelerated playback would increase the pitch of the music.

Looking into the issue deeper, reveals, especially with the elongation caused by the bluetooth protocol, it is not consistent. The elongation is bigger at the beginning of the signal. Better to say after any start of a playback the elongation starts and during playing the music the elongation decreases.
Here are some pictures taken from one of the measured elongations of an average Bluetooth speaker.

The first picture shows a quite simplistic test signal. Every second there is a burst of a single frequency. The same burst every second over and over again. 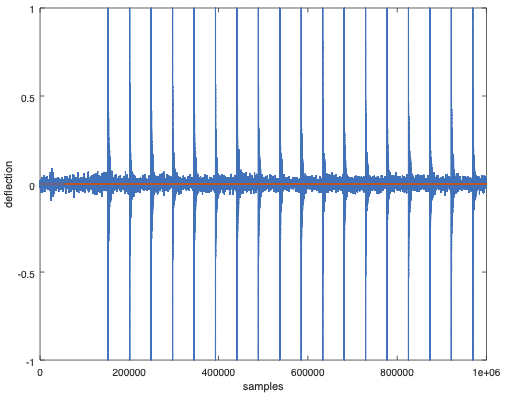 A signal with 48000Hz sample rate with a burst exactly every second has obviously 48000 samples from one burst start to the next burst start. A constant distance between each burst of 48000 samples. 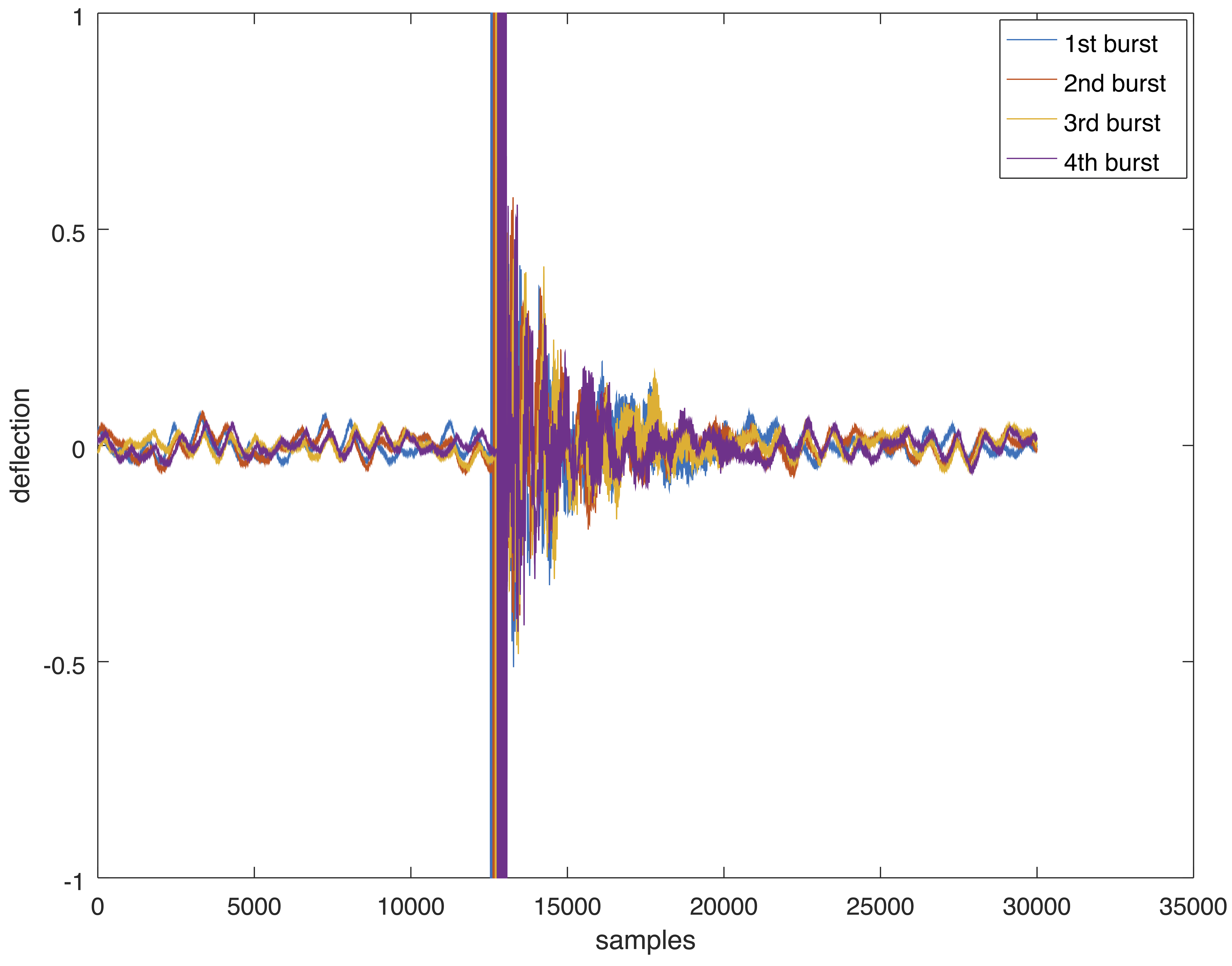 It is quite difficult to see that they actually come close together, but not exactly.

The third picture is a zoom into the recorded and moved together bursts on the start of the first burst. Here you can see they have a difference between about 82 down to 63 samples. If the signal wouldn’t be elongated, the four bursts would be exactly at the same position. The amount of elongation decreases over playback time. The first burst has an elongation of 82 samples, the last burst has an elongation of 63 samples. After further playback the elongation reduces to zero. Therefore the later bursts in the signal actually are exactly at the same position. Their distance is exactly 48000 samples as in the sent signal. 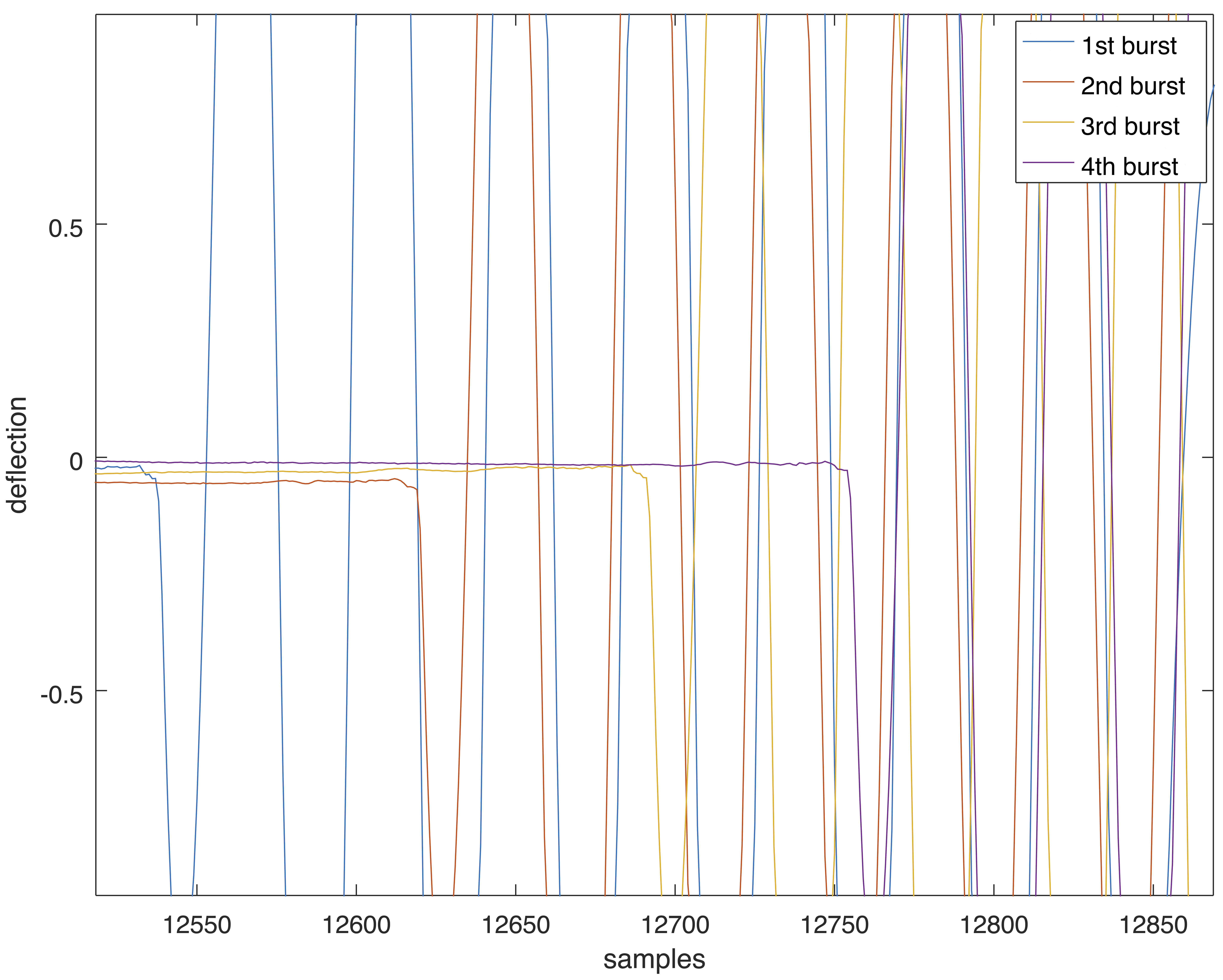 Where transmission signal elongation appeared and where not

We built the app to be used with bluetooth, airplay, wire, or even, for the new version of the app, with an offline signal. With wireless connections we experience lots of delaying effects, because the system needs time to process between the start of the replay and the moment you first hear something. Also, cutoff effects, which cause the first part of the signal being cutoff, i.e. you won’t hear it.

While using a wired connection, we did not experience any of those issues, although it might happen due to other digital processing than wireless transmission also. Using the offline option in the new app version showed the same effect. Offline in that case is the transmission of the test signal not by the app (mobile device) but e.g. using a file played from a different system, e.g. from a streaming computer. That again offers the options to transmit via wire or via bluetooth. Using bluetooth, it reveals the same elongation effect, via wire it did not.

I mean, who cares the first part of a music piece, just the first few seconds and only a minor effect, right?

However, elongation in that way, slows down the playback. A bid like with cassette players in the 80’ when their battery life came to an end. Slowing down the playback increases the playback time for a piece of music. In case a frequency of let’s say 1000Hz is played for one second, there are one thousand full sinus waves in that second played. If the signal playback would be slowed down to two seconds, the thousand waves would be played in two seconds. But that means we hear only 500 waves per second. This is a frequency of 500Hz, i.e we hear 500Hz instead of 1000Hz.

Are those signal processing issues of a size that we hear them, maybe. We had systems that slowed down and speeded up again. We repeated it over and over and could easily hear it and reproduce it. It is a bid like the modern version of the hurdy-gurdy, the Bluetooth version of the hurdy-gurdy like in the old times when we gave our cassettes a good whack to reduce “wow and flutter”.

Potential systems with lower quality Bluetooth protocols tend to have more high chances for such effects on the playback. Higher quality protocols might reduce those effects.

Depending on the system you might choose wired connections over wireless, airplay over bluetooth and higher quality bluetooth protocols over lower ones.

When listening to music and if you are using a system with a hearable effect at the start of a track, you could fade over from music track to music track to eliminate new starts. This would reduce the effects.