The graphic shows the three position average measured amplitudes across the frequency band. The dotted line indicates the measured average amplitude across the frequency band, with a listening position relevant adjustment. This dotted line provides orientation for an optimized  frequency response at listening position. The amber and red lines indicate rating thresholds. Measured amplitudes crossing those thresholds cause respective ratings.

The table lists the 5 measured frequency range amplitudes with biggest difference to the „dotted line average“, with their difference in decibel.

Frequency response is used to describe the output of an audio system. It represents the amplitude response for each frequency in a range, mostly between 20Hz – 20.000Hz. An audio system should play back an input signal that has a constant amplitude level across the whole frequency range, for every tone in the frequency range, with the same output amplitude level. Any deviation from this output amplitude level would represent a manipulation by the audio system. The flat response is the universal reference for translating the tonal balance of the musician’s original intent to any sound system and between sound systems. No matter if you are listening to a system in your car or to a system in your living room.

An audio system accelerating or attenuating some tones

This consequently misrepresents the musician’s original intent. Frequency responses might not be accurately flat on purpose. This allows to receive warmer, bass heavy or brighter sound, depending on your preferences.

A frequency response of a system is pretty flat if all amplitudes of the frequencies between 20Hz and 20000Hz are in a range of +- 3dB. Consequently, the difference between the loudest and the most quiet tone could still be up to 6dB in such a flat response. While a difference of 10 dB is perceived as doubling the loudness of a tone.

Independent from individual preferences, no tones should be significantly accelerated over the others in a frequency range of an audio system. If there are amplitude differences of 20dB or more, in the range of 70Hz up to 15000Hz (easier to hear than 20Hz-20kHz), these tones would color the tonal balance during the listening experience.

The ideal frequency response at listening position is not flat

Why is the listening frequency response not flat

This certainly also relates to comp filtering. The delay between direct and reflected sound is the same for all frequencies. Floor reflexion cancels some frequencies, contained in the direct sound of the loudspeaker and boosts others.

The lowest frequency „f“ cancelled is determined by its halve-wavelength being equal to the geometric delay between direct and reflected sound. Twice that frequency (2*f) will be reinforced by the reflexion. 3*f will be cancelled, 4*f reinforced, 5*f cancelled, and so on. On a linear frequency scale, the effect of the delayed reflexion on the direct sound’s spectrum looks like that of a comb. 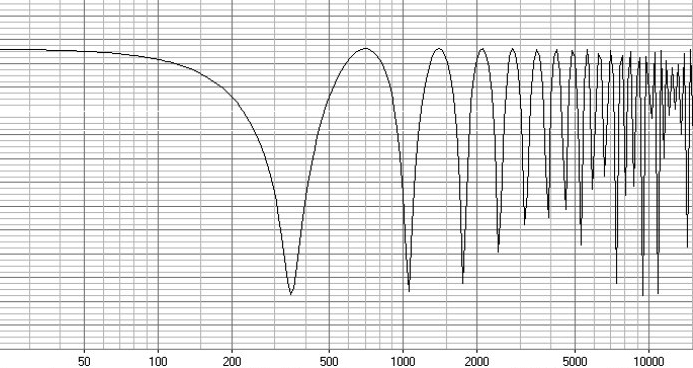 Usual living rooms add hundreds of delayed reflexions to the „direct sound“ generated by the loudspeakers.

Speakers possess frequency-dependent directional qualities. For both, mids and highs, they produce adequate sound levels only in the forward direction towards the listener. Lower frequencies from the same speakers, however, radiate equally in all directions. This directionality means that mids and highs are efficiently beamed towards the listener, and little acoustic energy is wasted on illuminating the rest of the room.

The lows easily require six or more times the acoustic/electric power than the mids and highs to achieve the same sound level at the listener’s position. Speaker efficiency is one reason for power gulping. The other is directionality. As bass waves are bigger than the speaker, they travel with equal strength in all directions. The speaker is an “omni” pattern sound source. Often much of the bass wavefront has bounced off of the walls, floor and ceiling of the room before it even reaches the listener.

*By Arthur M. Noxon: Sound is acoustic energy and rooms store this energy. Resonance is nature’s most efficient way to store acoustic energy in a room. Resonant energy easily lasts two times longer than sounds that are not resonant, and this is how the coloration of sound occurs in small rooms. Originally written and published in dB Magazine, November/December 1991

The sound we hear at the listening position should be dominated by the direct sound from the speakers. However it is always, except in an anechoic chamber, combined with some ambient noise and the incredible amount of reflections that exist in any usual listening room. This holds true also for professional sound studios or highly equipped listening rooms.

There is no general rule how to design a listening room. How much reflected energy improves or harms our impression? From which direction of incidence, and how much delay? Diverse concepts are used in studios as well as at homes. There exist only few AES papers about this. It seems that different music prefers different room contribution. Similar to life music: Classical concert halls are more reverberant than multi-purpose halls. Consequently there is no general rule on how to adjust the frequency response ideal curve. However here is an example on how TestHiFi does the adjustment to the frequency response. 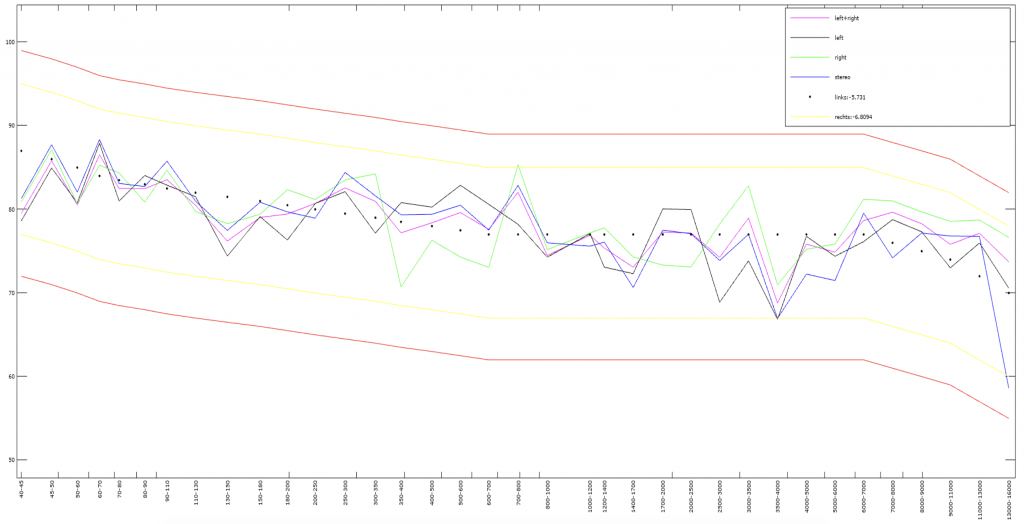 Lets stroke every key on a piano keyboard, one after the other, with the same strength. This should not give us some tones less loud than others. That would be a flaw in the piano that needs to be repaired.

A system with severe frequency response amplitude drops or peaks would play some tones less loud or more loud than others. This would be a harm to your music experience at the listening position, and as such not HiFi.

Although the ideal frequency response at the listening position is not flat, measured amplitudes should not diverge much from the indicated dotted average. Systems which deliver amplitudes for lower frequencies underneath the dotted line sound rather less deep and punchy in bass. Those that deliver upper frequencies above the dotted line sound rather sibilant, shrill and brittle.

The ambience noise influence on listening

Choose a system without flaws or tricks

A system might have flaws in form of drops or peaks that negatively influence your listening experience. Position or adjust the system to cover for this flaw. There are several “tricks” available to seemingly make a system sound good. Any severe amplitude drops in the frequency range would be a significant compromise.

Bass levels of a speaker with rather low bass levels appear higher if positioned in a corner, surrounded by stone walls. When listening to some test music in a store, while in discussion with the seller and obstructed by the store ambience, it might sound appropriate. Back at home, the speaker is in a totally different environment and position, away from any strong reflecting material. Subjectively, the speaker still might not sound unbearably bad. However a speaker with appropriate bass levels most probably would sound much better.

Where to place a speaker for the right compromise

Positioning of your speakers might influence the loudness of some tones. It can make them louder or less loud, i.e. accelerate some tones and attenuate others. Also important is the material, i.e. which carries a speaker, which surrounds a speaker and which is in front of the speaker on the ground.

What to place the speaker on for the right compromise

Plenty of measures to improve sound at listening position

Usage of an equalizer: equalizer allow to attenuate or accelerate amplitudes of specific frequency ranges. This is an option in order to compensate drops or peaks in a frequency range at listening position.