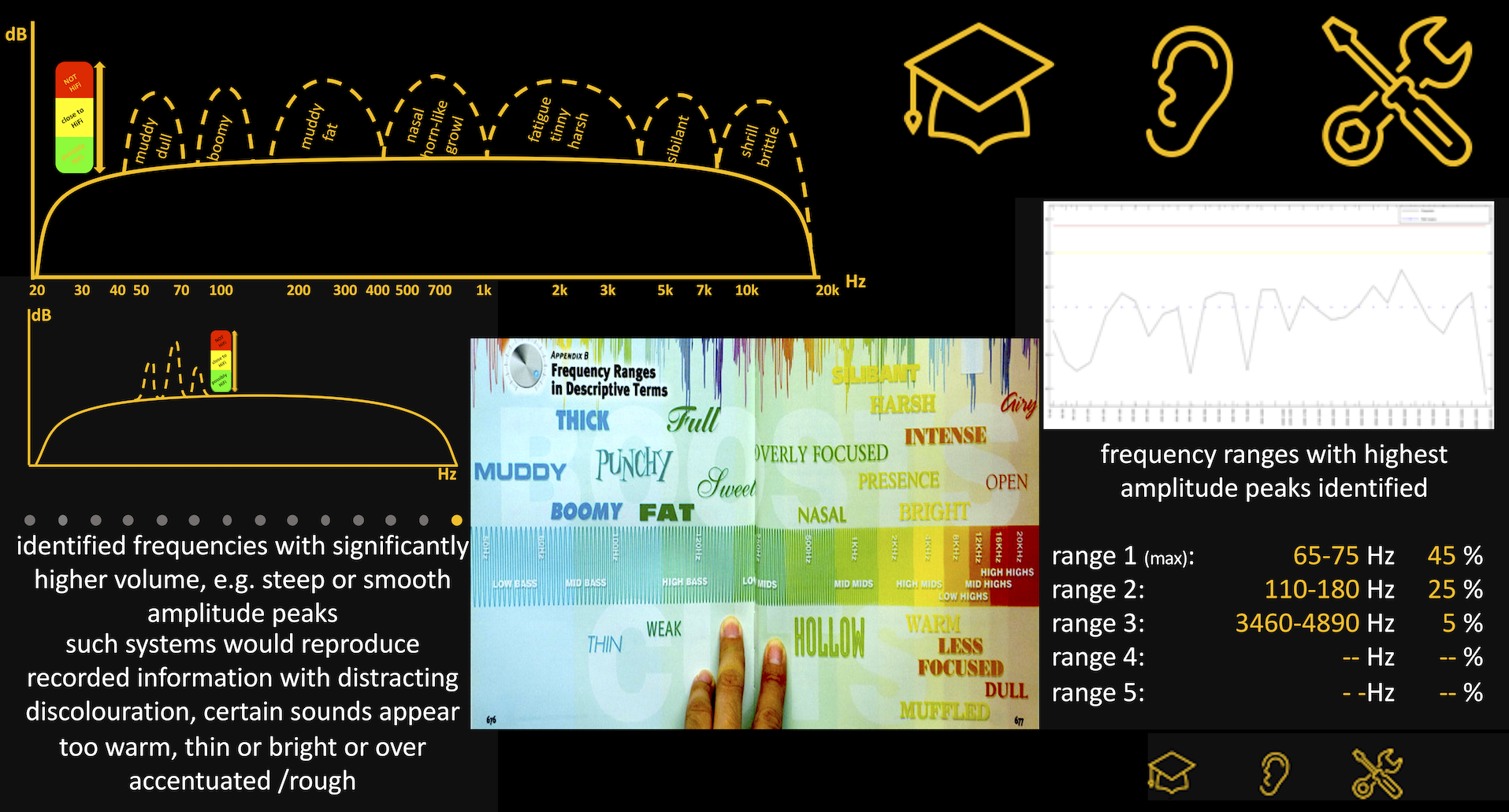 Frequency response amplitude peaks: some frequencies are reproduced with higher level than others.

An audio system accelerating some tones.

This obviously misrepresents the musician’s original intent. Frequency responses might be not accurately flat on purpose. This allows to receive warmer, bass heavy or brighter sound, depending on ones preferences.

A frequency response of a system is pretty flat if all amplitudes of the frequencies between 20Hz and 20000Hz are in a range of +- 3dB. The difference between the loudest and the most quiet tone could still be up to 6dB in such a flat response. A difference of 10 dB is perceived as a doubling of the loudness of a tone.

Independent of individual preferences, no tones should be significantly accelerated over the others in a frequency range of an audio system. If there are amplitude differences of 20dB or more, in the range of 70Hz up to 15000Hz (easier to hear than 20Hz-20kHz), those tones would color the tonal balance in the listening experience.

This would be a flaw in an audio system.

Depending on the test sound or played music and the environment with its obstructions, like in a big electronics market, it could be difficult to identify such flaws solely by listening.

Stroking every key on a piano keyboard, one after the other, with the same strength and receiving some tones a lot louder than others would be a flaw in the piano that needs to be repaired.

A system with severe frequency response amplitude peaks would play some tones much louder than others. This flaw in the audio system is a severe manipulation to the play back, and as such not HiFi.

This does not  mean at all, not to adjust the tonal balance to our preferences. If we like more basshead, we either choose a respective system or a system including adjustment options like an equalizer.

Choose your system in accordance with your listening preference.

Choose a system without flaws or tricks.

A system might have flaws in form of peaks that negatively influence your listening experience. Position or adjust the system to cover for this flaw. There are several “tricks” available to seemingly make a system sound good. Any severe amplitude peaks in the frequency range would be a significant negative compromise.

A speaker with over accentuated high frequencies might be positioned, pointing slightly away from you. It might be higher or lower than your head and not inclined towards your head. This will reduce direct impact of higher frequencies compared to lower frequencies. As such it will sound more balanced. At the same time it might negatively impact the stereo or sound stage effect. When listening to some test music in a store, while in discussion with the seller and obstructed by the store ambience, it might sound appropriate. Back at home, speakers set up intuitively directed towards the listeners position, they might sound to bright, even shrill or harsh. The speaker subjectively still might not sound unbearable bad. A speaker with appropriate high frequency levels most probably would sound much better.

Where to place a speaker for the right compromise.

Positioning of your speakers might influence the loudness of some tones. It can make them louder or less loud, i.e. accelerate some tones and attenuate others. Also important is the material, i.e. on which a speaker is positioned, which surrounds a speaker and which is in front the speaker on the ground. A speaker with over accelerated bass, positioned closely surrounded by walls and the floor, like a stand speaker in a corner and a thick carpet in front, might be even more bass heavy. The second stand speaker probably positioned on the other side of the living area, being open to another room and not close to a wall, might be a less bass heavy, more acceptable. To better balance the sound between left and right, position the first speaker further away from the strong reflecting walls.

On what to place the speaker for the right compromise.