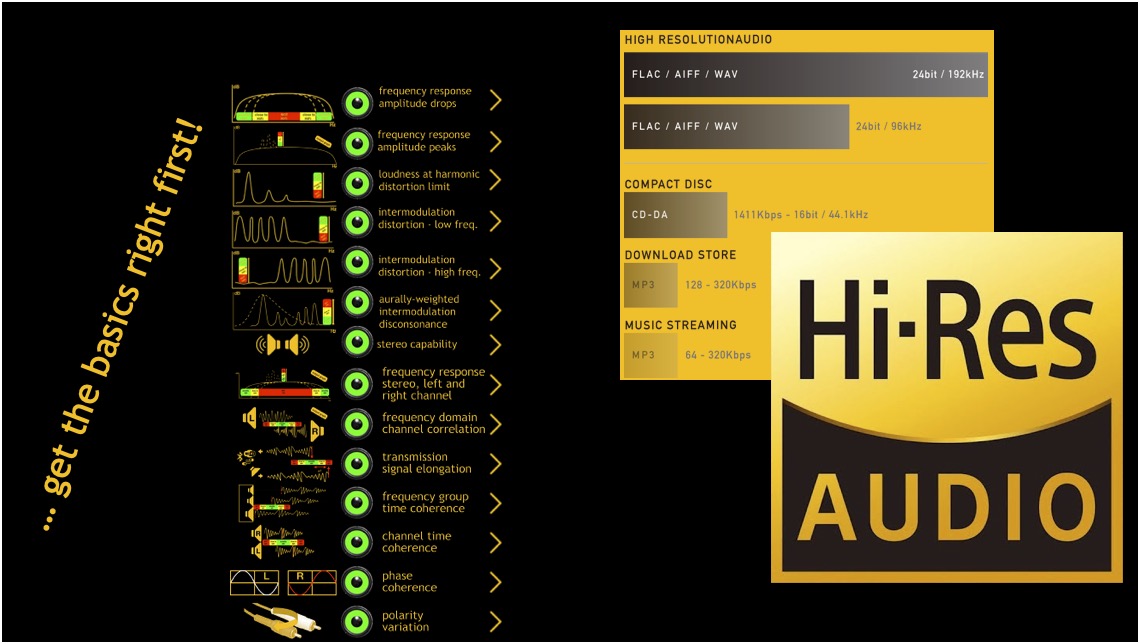 Digitalization used to be a harm to the quality of music reproduction.

In the early days music digitalization, it was quite difficult to cut the analog information in small enough digital slices. That was on one hand because of the necessary software and algorithms involved. On the other hand because of the tremendous amount of data involved. Later, the data volumes were compressed to enable for their handling or at least to make it easier. As so often in history, customer comfort overruled higher quality requirements. Copying MP3’s was so easy. Digitally accessing the music was so easy. Skipping songs in a walkman also storing and handling tons of songs in file systems became so easy. Al that seemed to be much more important than the actual sound quality.

Technology developed and the issue about mass data diminished

MP3’s did not seem to be the best quality way of storing music. Better compression technics helped to improve the quality. Today we debate if the typical CD format is of enough quality. Although even such discussions are obsolete nowadays, as most music is available in the quality of their recording, i.e. loss less format.

High resolution music is the name of the game. As long as you have a decent connection to the internet, you don’t even need storage, we just stream the highest quality, the highest resolution, the highest amount of data, even with our smartphones.

Amount of data does not limit the user comfort anymore. As such, the reason to use lower resolution music diminished.

The fact, that everything comes at a price, is real for data transfer as well. With its energy consumption and as such with its climate impact. However this is not in scope of this blog!

Talking about price, hi-res streaming still is more expensive than normal streaming. But also there the development does not stopp. Just as an example, Recently Qobuz proactively approached their user of their hi-res streaming service with a fee reduction.

It is not anymore a question of digital versus analog

Recording happens not anymore with one stereo microphone in front of a musician or group, of course not. The whole process of recording with many microphones at different places and times and bringing this together became digital. The quality of recording and immediately converting it to digital data allows for a much more featured processes afterwards. Mixing and mastering and all this became in about all cases digital. Almost no one does this whole process analog anymore. Therefore newer vinyl disc that we get to here contain analog information that has been digital in-between the recording and the pressing into vinyl.

Why analog sounds different than digital?

Since in many newer cases after recording, the digital sound is pressed to vinyl and in parallel is also provided as hi-res files, it is not a question of analog versus digital anymore. Of course not, as the source after recording is already digital. Yes, there might be still some rare cases of fully analog production. For the typical case today, the information is digital after the recording and converted back to analog for the storage in vinyl versus stored digital on a file. We clearly can say the difference in sound is added, not caused by the digitization.

Assumptions regarding the cause of the difference between vinyl sound and sound from a digital file include the difference in mixing and mastering but also the added distortion by the vinyl and the turntable and many others. I am personally a big fan of listening to vinyl as well. But only listening, I do not want to own a vinyl system, just because of the comfort implications.

It is all about the audio system and the room acoustics

As there are differences in-between a vinyl system and a non-vinyl system, there are enormous, tremendous differences in audio systems in general. As if this wouldn’t make the story complex enough, the influences by the room on the sound are even more critical. Sound quality provided by the speaker of a phone compared to one provided by a high end audio system of a price for a residential property, are obviously different. One of the very typical differences is the bass sound. An as small as a phone speaker just can not move enough air to provide a bass sound like a huge bass woofer. Therefore it seems to be very clear, the audio system must be capable to reproduce the music.

The audio system sits in a room with us. Even the best audio system is not capable to overcome physics law. Music provided by a speaker reaches our ears directly and indirectly via the wall or floor reflections. If room acoustics are not addressed actively, they can and do destroy the sound. It is as strong as this.

The old story of comfort versus quality

In many cases the comfort in usability or flexibility of the audio system is more important than quality, e.g. a mobile bluetooth speaker or various speakers in different rooms steered with one control. Some of those systems themselves do not provide HiFi level quality of sound. Others are positioned in the room in a way, that their sound is negatively influenced by the room acoustics. For such cases, the impact on the sound quality may not be healed by usage of hi-res music. The contrary is the case, the improvement in quality between standard resolution music and high resolution music will most probably not be recognizable on afore mentioned situations.

Let’s keep aside the personal likes regarding any added flavor by analog parts in the music reproduction chain like vinyl and other than the last step, the speakers. There are plenty of audio system capable of HiFi reproduction. Such systems set in acoustically aequate rooms appropriately to not destroy the HiFi sound of the audio system. For such cases the sound quality significantly enhances, the closer the played back information quality/resolution is to the music quality/resolution of the produced, mastered music.

Yes, of course and it is only very logic, higher resolution is better than lower resolution

Let’s not mix up things too much. It is as simple as this. If you are listening to a HiFi system in good room acoustics, hi-res music improves your listening experience.

Digitalization - how far can it go?