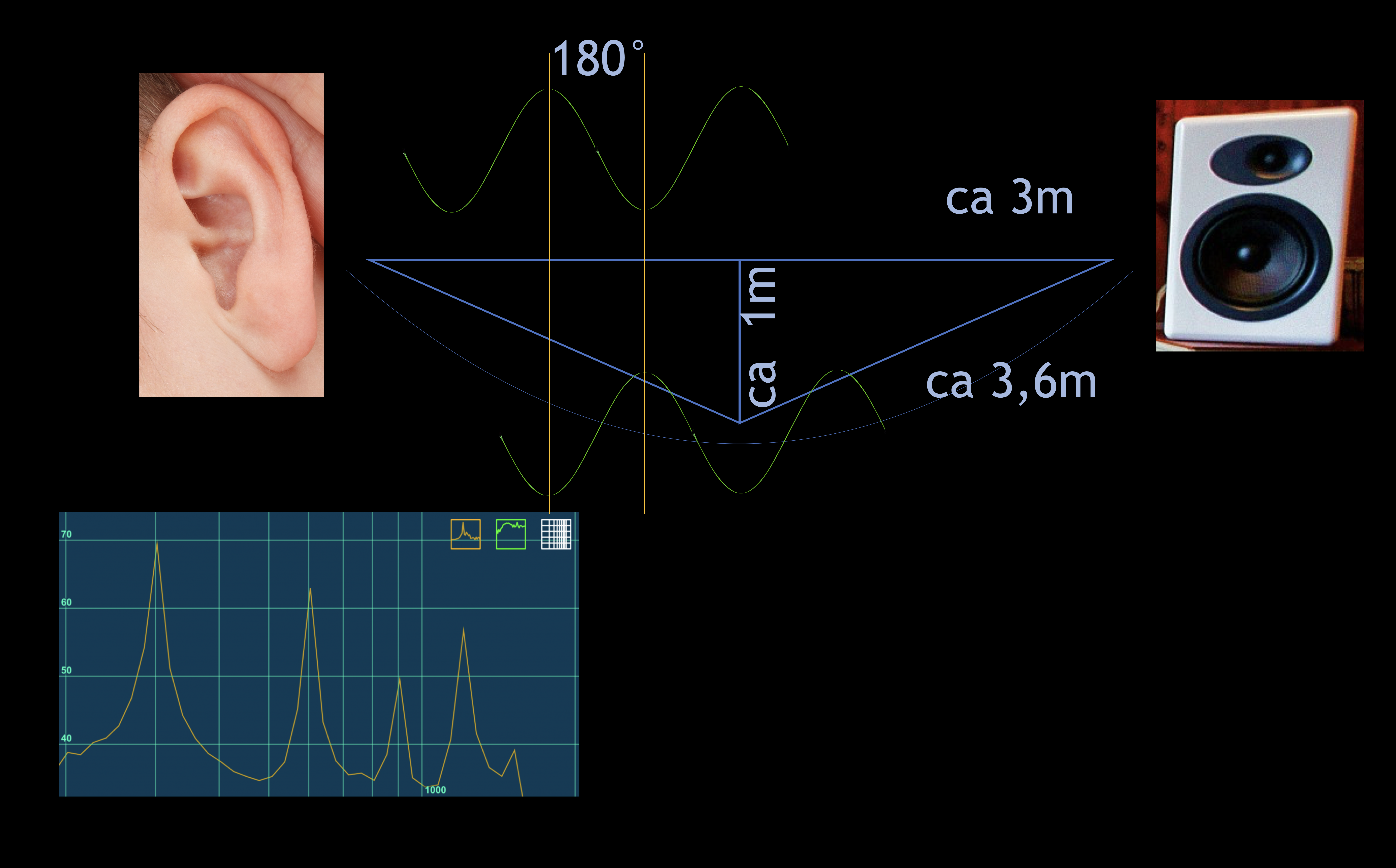 Why would you get different measurement results for harmonic distortion at different places?

Sure, this is a clear thing. Let’s assume, we listen to two sound waves of the exact same frequency.  One of the two with 180 degree offset. With other words, one of the two arrives later, exactly with one half of its wave length. In theory, we hear nothing. In theory.

The difference between theory and practice is bigger in practice than in theory.

In practice we hear something, but significantly less than the two tones without offset. In practice it is very unlikely, that both of our ears are exactly at the same distance to the sound origin. And, please, let’s skip for a moment the technical issues how the two tones are reproduced and so on.

This effect, in principle, holds also true, if there is some in-accuracy in the game. When we listen to two tones with frequencies not exactly the same but close enough. Also when we listen to frequencies they have a not exactly, but close enough offset. Combination of both of course also. What happens in such cases where some in-accuracy is in the game? The level elimination or netting does not go up to 100%. Therefore in practice we have many cases like this, but with lower effect.

Following many of these discussions on audio system quality and their frequency response accuracy, we see debates about very low decibel discrepancies of one to five decibel. Listening to music might happen somewhere between 60 and 90 dB, probably? Therefore an elimination of less than 10% are of a magnitude higher than such system driven discrepancies.

Room treatments are of more significance than system changes.

Keeping the afore in mind let us come back to harmonic distortion. Such distortion are a relative measure of levels of higher order harmonic distortion frequencies (h2, h3, …) in relation to the level of the fundamental tone (f). The picture below shows a singing tone with a fundamental at about 300Hz and its h2 about 7 dB lower, its h3 about 20 dB lower and its h4 about 13 dB lower.

Back to the measurement at listening position. Measuring HD at a position in a room is obviously influenced by the reflections. If such reflections “so to say” hit the fundamental at about 300Hz (just using the example of the picture), it would cause a higher level of distortion. Since the harmonics are bigger in relation to the fundamental as if the fundamental wouldn’t be hit.

If room reflections would hit h2 at about 600Hz (again picture), distortion level would go down.

A real life situation could be, that one sits about three meters in front of the audio system, with his ears about one meter above the ground. The audio systems speakers might be positioned roughly on same hight above the ground. Consider the ground reflection in the middle between the speakers and the ears. At roughly around 210Hz there might be an offset caused by the ground reflection to the direct sound from the speaker. In case of measuring HD in this position for 210Hz the outcome of THD might be too high.

This effect would occur at this particular position. The effect reacts on the distance to the audio system and to the reflecting surfaces around. Measuring at two positions helps to understand if the measurement is compromised by reflections. For certain frequencies at two positions it can, with some reasonable probability, be identified if the fundamental is effected or if the harmonics are effected. With three ore more positions, those effects can be identified even better.

It is obvious that measuring HD in real life situations is quite a challenge. However we should keep in mind, measuring with exclusion of room influences makes it difficult. But if we do not try to exclude the room influences, we actually measure what we get to hear! We do not measure the quality of our audio system, we measure the quality of sound that we are listening to. WYSIWYG – What You See Is What You Get 🙂

You can hear the difference - listening example