You can hear the difference - listening example 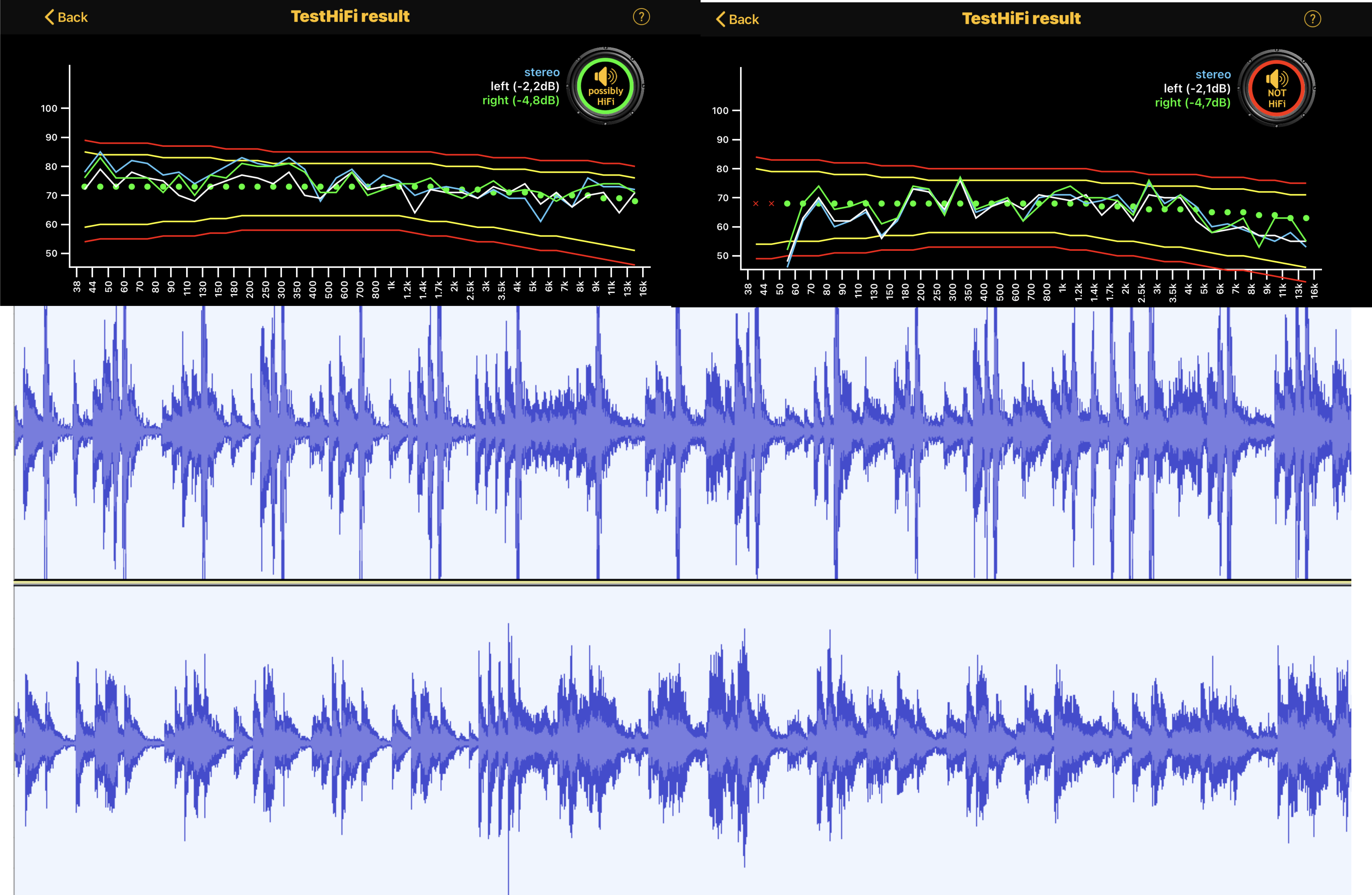 You can hear the difference – listening example

Any system plays music it is just a question of how close it comes to the original. The question of hifi, high fidelity.

Even a mobile phone speaker lets you hear the music. However, if you want to enjoy the music, feel the music and get the whole joy out of it, you probably do not choose the mobile phone integrated speaker, but a good audio system. Since, you can hear the difference.

Listening to the listening examples in this blog we recommend to use headphones or a quality speaker. A speaker of a mobile phone, a tablet or a laptop might not be able to deliver the lower frequencies needed.

Those files represent one audio system each, the first file a system which can easily be classified as a hifi system. The second file represents rather a quite good mobile audio system, not really hifi, may be close to hifi.

Why is judgement on good hifi difficult without direct comparison?

Our hearing system adjust to the sound. We actually even can fill in the gaps in lower frequencies by using their harmonics. See our blog on “ghost fundamental”.

Although we do not miss out fully on the tones of such lower frequencies, it is not the same.

For some it might be ok, for others it is not.

Some files to make it more obvious

The next file puts a sequence of a part of the first file and one of the second file and Switches between them. Here it is even more obvious how different the two systems sound.

Next, we recorded the test signal we use to measure the differences at the listening position.

Just as a reminder, all recordings took place at the same position.

The first signal sequence is taken from the hifi system the second from the other system.

And last I selected the low frequency part only, repeated it several times and switched between ten. First the hifi system and second the other system.

With those files it should be very obvious how big the difference between the two systems is, especially in the area of low frequencies.

Difference between bad and very good

„3D“-video is a combination of two pictures for our two eyes to create a stereo effect that allows us to feel the room in the picture, including the third dimension, the depth.

The third dimension in sound

Most difficult characteristic in sound replay is the third dimension, the depth. Not only left and right, but the development from the normal sound that feels to be like the two dimensional to the three-dimensional sound.

This has nothing at all to do with all the various types of surround sound. I am just talking about stereo sound. If you get all things right together, you can hear the „3D“-effect in stereo sound. It is about frequency response, distortion (aurally weighted) and especially time and phase coherence. All this together and you can virtually step into the stage, you feel the 3rd dimension. The time and phase coherence throughout the whole playback system are the most difficult thing to get right. Let’s come back and focus on first things first, the frequency response.

One system sounds deeper and richer the other one sounds tinny

Tinned, no deep bass sounds, neither from the drums nor throughout the whole music.

However, measuring this seems to be easier as it really is.

Here are the frequency responses and the distortions for both systems, measured with TestHiFi.

Less focus on the system only – WYSIWYG for audio

Here are the measurements taken with the new measurement coming soon in TestHiFi (we are not yet done with final testing and Android development).

There you see the test results measured at the listening position. This is WYSIWYG for audio.

The first measurement results show the hifi system. The second show the mobile system. Here you see for the mobile system, at a certain level, the lower frequencies cannot be produced anymore. Sitting at a listening position and receiving music at about 80dB would be adequate. However, the mobile System, most probably due to the significantly increasing distortions, reduces the lower frequencies to a level that they cannot be detected anymore (red crosses).

This reminds me a bid to the Diesel scandal, although it is of course in no way related. When testing under test condition (three position average close to the systems speaker) the lower frequencies are ok. When testing in real live situation, at listening position, the weaknesses appear.

I do not believe the solution is only in more quality measuring. In case we don’t understand the problem exactly we try to throw more measurement details and quality onto the problem to solve it. Probably, we need to rethink what and how to measure.

However, the really strange thing is, one can tell the difference between two recordings taken by a mobile phone at the listening position.

Now let’s stop here and rethink the discussion above – all listening examples were recorded just with the voice memo app on a mobile phone. Differences in those examples might seem small, at least they seem smaller as they were in real. Still you here the difference even within just the mobile phone recordings. The measurements were taken with the new to come TestHiFi App including the new measurement at listening position and the new graphical output.

This makes me think. Could it be, that the whole measurement discussion, the blind test or double-blind test discussion and so on go towards the wrong direction? I guess, we need to rethink the story of measuring sound quality.