Critical systems respectively setups with phases not in coherence or wrong polarity might lead to partially or full cancellation of sound.

Especially wrong polarity on either side of the stereo channel speakers is rather a setup issue. It can be easily fixed by changing the connection.

I found the explanation of Jeff Towne: Its a phase youre going through quite understandable, therefore I refer excerpts including a listening example of it here.

It’s a perplexing problem: the mystery of the disappearing audio. When the music is played back, some of the sound is missing, silent. Play the same mix back on a different system, and the mystery files are back. Or perhaps it sounds fine in headphones; the meters bounce normally. Yet when you play it back on the speaker, there’s nothing there. Even more mysteriously, the level meters are still bouncing as if there’s audio. Plug in the headphones, and the audio is back.

What in the World is Going On?

The problem is phase: in particular the phase relationship between two sound files that ostensibly are identical, but whose peaks and valleys are out of synch, in fact they may be exact opposites of one another. Technically, there are two different phenomena: Polarity and Phase,
and signal problems resulting from wiring differences are more accurately the result of a polarity issue, not phase. The term “phase” is more properly used to refer to waveform interactions based on time and distance. However, both issues are commonly referred-to as “phase.”

Both polarity and phase manifest similar interference and cancellation issues. It basically means, music on two stereo channels which are out of phase or have switched polarity can have as a result that some sounds can not be heard. All the active noise cancelation headphones use this principle. They record the outside noise and play it back with inverted phase/polarity. Plus-sound and minus-sound cancel each other out to zero sound.

For stereo sound systems this usually does not effect the whole music, i.e. the effect is not that we do not hear anything. It rather effects some parts at some time while listening. Whenever the parts of the music reach our ears at listening position with from one channel and at the same time from the other channel with inverted phase. That part of the music will be missing.

Of course, this leads in some cases to significant flaws in sound reproduction.

There IS an audible difference when using a stereo track with the left and right channels “out of phase” (with reverse polarity.) The left and right channels interfere with each other when combined, which can create various effects. Played back in stereo, the out of phase audio can sound relatively normal, although it won’t seem to have a solid location in the stereo field. The sound from a single mono microphone, recorded in-phase on a stereo track (or a mono track panned to the center) will appear to be perfectly in the center of the stereo image, seeming to hover directly between the two stereo speakers. Out-of-phase audio has an indistinct stereo image, it will seem to come from out beyond the edges of the left and right speakers, with a weird, empty hole in the center of the stereo image. The sound isn’t tilted to the left or right; it’s both at the same time, and missing from the center.

Here’s what that sounds like: Listen to “Bad Cable Phase Problem”

If you listen to enough out-of-phase audio, you can hear that lack of center and quickly identify problematic audio. It’s a little harder to do in headphones than speakers, but still identifiable by ear.

Potential systems with one stereo channel only or summed up left and right channel such systems or in one case only are obviously not relevant for those issues. In general this criteria is less relevant when buying a system. With one exception. Some systems have switched phases following their crossover design. As described in the blogs Phase & Time1, Phase & Time2 and Phase and Time3. Such a design has certainly its benefits when listening to. However quite well trained listeners might be capable of hearing such issues.

When setting up a system with stereo speakers in separate cases, sometimes such speakers have even for each of their (Frequency group related) speakers a separate connection. It is not unusual that one or more connections accidentally go wrong in terms of polarity. 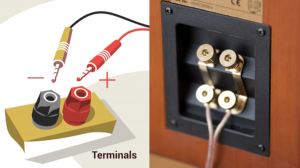 Except identifying and correcting a potential wrong polarity, there is not much one can do while listening to music.