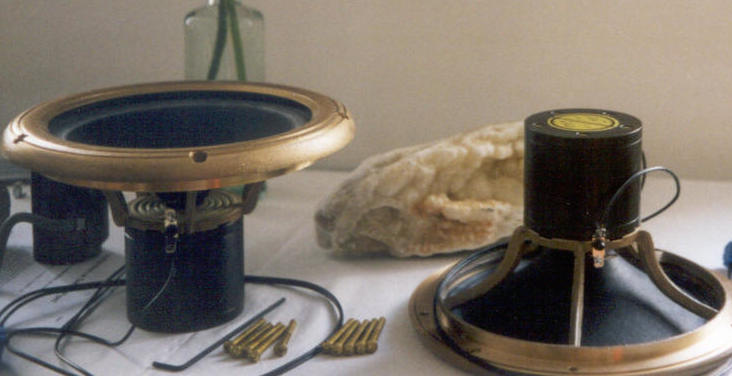 Listen to the blog: Phase and Time 1

While certain crossover configurations let tweeter (HF) and woofer (LF) radiate in phase with each other, this does not mean they radiate at the same time. Motivated by questions to my loudspeaker phase response blog I feel we could take a closer look at the issue.

As a first example, the 2-way loudspeaker with second order crossover.
Assuming LF and HF mounted with their acoustical origins at the same distance to ear or microphone,
LF will respond 180 deg phase delayed relative to HF at all frequencies.

As indicated in my interference blog this causes cancellation of the summed LF + HF signal.

To prevent this, eg. LF is connected with inverse polarity. This inverts phase, and both systems radiate with zero phase difference now. Perfect sum with +6 dB at the crossover frequency.

The phase response of LF and HF overlay to one single line in the graph now. They radiate perfectly in phase (see below). Which means, at equal amplitude both signals add up to +6 dB at the crossover frequency (see above).

But LF is not shifted forward in phase by reversing polarity. The phase lag due to the filters is still there.
For example, at the 400 Hz crossover this means LF starts to radiate one half cycle later than HF. One half cycle of 400 Hz lasts 1/800 second, or 1.25 ms. In other words, 400 Hz is radiated twice in time, with the woofer lagging 1.25 ms behind the tweeter output. Plus inverted polarity.

So, while the frequency response may in best cases look pretty perfect, time domain response is poor.
Considering the increase of phase shift with steeper filtering, we might tend towards lower order filtering.

But: only at the crossover frequency both LF and HF radiate with equal amplitude. The basic task of filtering is to prevent LF distorting HF, and protect HF from LF energy.

Therefore, the bandwidth around the crossover frequency where both produce sound with similar amplitude gets smaller with increasing filter order. Take another look back to my last blog about LS phase response. First order filters, with 90 degrees phase difference, let LF and HF radiate with less than 10 dB amplitude difference from below 150 up to above 1 kHz. -10 dB is experienced as about half loudness.

Contrary to room reflexions – which have constant delay for all frequencies – a phase lag implements a frequency dependent delay. Our hearing is well trained to ignore room reflexions – but will the recognition of phantom sources be affected by these very different phase issues of most loudspeakers used today?

Maybe such time domain issues are one reason why some people still like wide-band single radiator loudspeakers.