Mankind made it to the moon, but a just correct audio system seems to be impossible.

This view of an audio system includes the whole reproduction of music. Including, but probably not limited to recording, mastering, mixing, compressing, storing, sharing medium, conversion from and to analog or digital, amplifying, filtering, distributing and output by speakers.

It is not always obvious for all, that even listening to an iPhone with headphones, includes all the above-mentioned elements of an audio system. It is so simplified and easy to use, that we do not even recognize the complexity behind

Ease of use comes at a prize

Minimizing the complexity of handling makes something very easy to use. The remaining handling activities have to be as intuitive for the user as possible. In addition, it became relatively inexpensive to consume  music, whenever and wherever, respectively the products are affordable. Increasing usability often goes along with a standardization and reduction of flexibility. While decreasing product costs often go along with mass production and material or sound quality reduction.

Music source for every playback system

Since the audio playback systems are extreme heterogeneous, music sources like MP3, MQA or FLAC file, a tape or vinyl disc, have to be very compatible. Playback systems are available for all type of sources in all areas and categories. They reach from old to new, cheap to expensive, simple to complex, low level to high end. For example a vinyl disc contains recorded, mastered, mixed and stored music that we play back on an ultra-high-end system or on a plastic kid’s turntable.

Production of music files for any kind of storage medium is always a compromise. Producers design the music to sound best on either a kind of average playback system or for specific categories or high-end systems. As such, it is difficult to define, what is correct for any kind of recording.

The second part of an audio system is the part of the system that plays back any given recording or source of music. The problem of a non-standardized or defined recording, first and foremost results in a manipulated input into the playback system. Therefore the recorded music compares not necessarily correct to the original music.

In simple words, a playback system potentially can take a HiFi input and provide a HiFi output. Or even more direct, garbage in – garbage out.

The playback system, of course can only play back what is on the source. To reduce variables in this discussion of a playback system, we take the assumption that the recording and storage is ideal, meaning one to one the ideal recording of a music.

A correct playback system delivers the input as output, with no manipulation. This would mean, it plays back the recorded music exactly the same, even with the same level of loudness, like the original performed music.

How to judge the played back sound?

Since we have not been present at the recording and as such have not heard the original music performance, how could we judge the playback of this music?

We keep the above assumption about an ideal music source. But even then, since we do not know the original music, how can we judge the playback systems correctness? What does it mean, it plays back correct? Input compares to output without manipulation. That is not realistic, as it starts with the level of loudness which is always being adjusted.

Reliably and trustful comparison can only happen if we have a measuring unit to compare with. This is true throughout all our life. We measure length or weight against units and even service or product value with the unit money. Everything which is trustfully compared must have a commonly defined unit to it. Without being measured against a defined unit one would not trust given product properties, as it cannot be verified. A well-known example is music output power. Even though, it has a commonly defined unit, Watt, since the measurement conditions are variable, the output power indication varies.

Do we judge correctness or taste?

The source of a music that is being played back, usually is not ideal as assumed so far. When we listen to a particular music that we know and even a particular file or disc, we compare our experiences that we make with playback systems. Sometimes we like more what we hear, and sometimes less. In some cases, we are even able to hear flaws of a system. A very easy to identify flaw would be, if a system does not deliver higher frequencies at the same level as it does with lower frequencies. Comparing high quality systems, those easy picks are rather rare. Mostly, we try to compare and find ourselves judging by our taste.

What would a judgement be, if independent from taste?

To be independent from taste, a judgement would need to be objective. Arts and science tell us, objectivity is everything that we can measure. We can measure everything that is defined and has a unit. Like a meter as unit for length. Reading lots of articles in audio magazines or on audio web pages and blogs, there are lots and lots of subjective and semi-objective descriptions of sound properties. Metrics and measurements are usually delivered aside to those writings but are not extensively used for an objective evaluation. What mostly can be seen is an overall subjective description with several, where possible, references to the measurements. The measurements itself do not completely address the quality or correctness of the playback system.

Do we actually know what to measure?

Many audiophiles talk about the air between the tones. It seems that some playback systems are capable of playing back music that sounds wider, clearer or even with a kind of perceived air, room or distance between tones. The perception of more air between the tones is mostly judged as being better.

What is a good measurement for this, or what would be the unit, meter?

Some technicians link the air between the tones to transient response. This measurement is commonly included in many reviews of audio systems. Should a large signal transient response be measured at 1kHz or even 10kHz with quite some voltage? Would the over tones not very quickly reach into the non-hearable frequency range and out of the amplifier’s bandwidth and the slew rate? And if so, is such a criterion rather irrelevant? Would a small signal transient response be of more relevance, like in the below graphic, where you see some overshooting in the second graph? 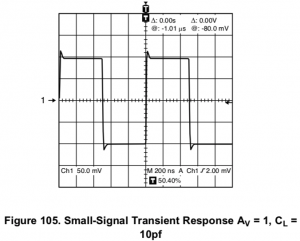 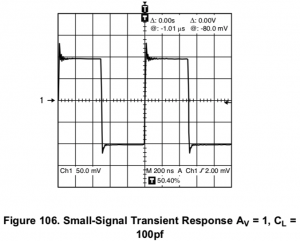 (Little side comment: What does this capacity information tell us about potential cables behind this amp?)

Even if we would agree on a large or small signal transient response, it would still be for debate, if it has a causation and not just a correlation to the subjectively experienced air between the tones.

I guess this well outlines the impression, why – mankind made it to the mood, but we still cannot measure the correctness of an audio system.

Do measurements correlate with listening experience at all?