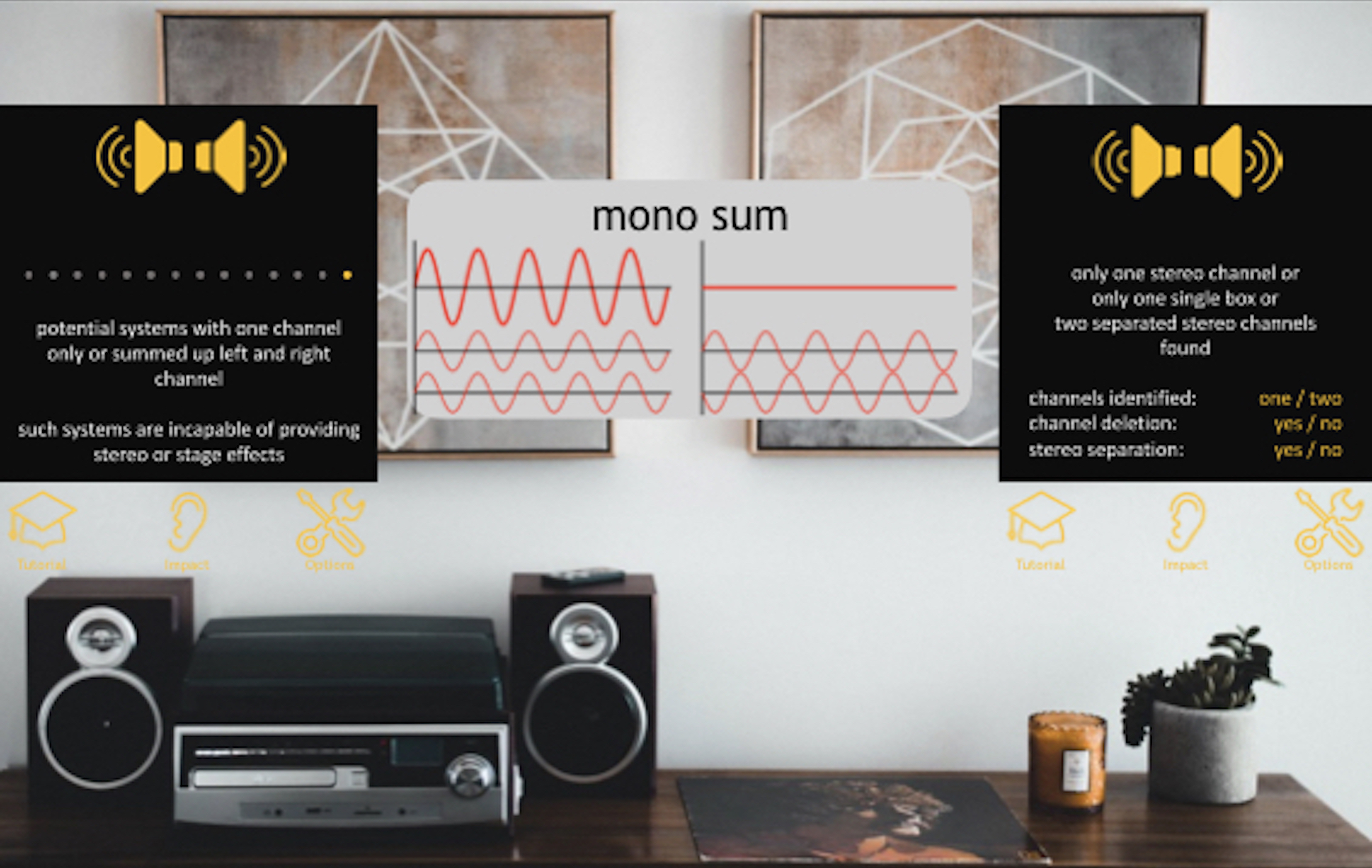 Systems with one channel only or summed up left and right channel. Such systems are incapable of providing stereo or of providing multi-directional audible perspective.

Critical are systems that do not reproduce stereo sound or even worse, those that play back incorrect mono sound.

A method of sound reproduction that creates an illusion of multi-directional audible perspective. This is usually achieved by using two or more independent audio channels through a configuration of two or more loudspeakers (or stereo headphones) in such a way as to create the impression of sound heard from various directions, as in natural hearing. It is an electronic simulation of sound-location-perception. The listener’s brain uses subtle differences in timing and sound level to triangulate the positions of the recorded sound sources.

During two-channel stereo recording, two microphones are placed in strategically chosen locations relative to the sound source, with both recording simultaneously. The two recorded channels will be similar, but each will have distinct time-of-arrival and sound-pressure-level information. During playback, the listener’s brain uses those subtle differences in timing and sound level to triangulate the positions of the recorded objects.

Stereo recordings often cannot be played on monaural systems without a significant loss of fidelity. Since each microphone records each wavefront at a slightly different time, the wavefronts are out of phase; as a result, constructive and destructive interference can occur if both tracks are played back on the same speaker. This phenomenon is known as phase cancellation.

Here is a youtube video which further explains it.

Descriptions of stereophonic sound tend to stress the ability to localize the position of each instrument in space, but this would only be true with an audio system and setup being capable to replay stereo information. In reality, many playback systems, such as all-in-one boombox units and the like, are incapable of recreating a realistic stereo image.

Human have 2 ears and listen to the world in stereo. The same way human use 2 eyes for stereo vision. If we close one eye we will lose the perception of depth and your peripheral vision will also be affected. The same happens with audio we also lose the perception of the wideness of the stage and we will not be able to pin point the several audio sources.

Dave Samwell explained it once like this (Sound engineer, midi tech, toured the world with platinum selling artists)

… These strange looking things (ears) pick up vibrations in the air around your head, and turn them into electrical signals to be delivered to your brain. It’s very convenient to have 2 of them with your big beautiful head in between them. This means if there is a tiger stalking you on your left hand side, the sound this ferocious animal makes will have more high frequencies when it arrives at your left ear (as the sound waves at your right ear will have had the inconvenience of passing through your skull) as well as arriving there roughly 1ms earlier. Your brain can decipher this and tell you:

“THERES A F…G TIGER OVER THER, RUN AWAY TO THE RIGHT!”

Here is a very nice video that demonstrates how well we are able to perceive localization information. The virtual barber shop.

Some listening experience on how we localize sound

Listening is more important than measurement (see middle section of Blog: „Should speakers be time and phase coherent?“)

Now for those of you who strongly believe in own listening experience being much more relevant than others measurement. I do not want to debate about listening versus measuring as both are important. However, here is some listening example to experience sound localization with stereo, mono sum and one channel only.

Best would be three listening stages. First, we listen with both headphones, second with one side only and third with a one case-only speaker, like a typical Bluetooth or wireless speaker. The latter is used for listening to a mono sum, i.e. one speaker delivering both left and right channel.

I recommend to listen to either of the two parts of music. Both parts are rather short, but good for this experiment. Way Out West by Sonny Rollins starting at 5:00; Thriller by Michael Jackson the first 20 seconds.

Listen with both headphones Way Out West, starting at 5:00 you will hear the saxophone on the left channel. At about 5:10 you will quite well recognize the movement of the saxophone.

Thriller starts with a door that opens, followed by food steps from right through the middle to the left. I found it to be very interesting, the door opening is mixed to the recording, in a way that you can hardly localize it. Whereas the food steps are clearly walking from right to left.

Now listen to both with only the right channel headphone. We experience the localization as much more difficult. It rather sounds changing between far and near than left and right.

The third stage of our experiment, listening to a mono speaker that delivers both channels by only one speaker (case) will give a listening experience somehow in the middle of the headphone experiences. It is a bid easier to localize than with only one headphone, but clearly not as good as with the stereo headphone example.

This is an utmost important criteria when buying a system. A system that consist of one speaker only can not create a wide perceived sound stage.

Choose your system in accordance with your listening preference.

The first and foremost important thing is knowing what you want. Systems might be for example small, mobile, waterproofed as such very handy on travel or on a hike. Some systems deliver high quality sound for quality reproduction of music which in turn are often quite big in size.

Choose a system without flaws or tricks.

A system might have flaws in form of not being capable to perform real stereo output. However, one case systems or even mono systems should play as correct as possible the music source. Combining two channels can be done in many ways. One case with two speaker (L;R) deliver stereo but narrow, one case with one speaker where left and right are summed up (L+R) deliver mono, one case where only left or only right is played and many more. Also there might occur phase issues where left plus right result in cancelation.

High end HiFi systems always will consist of two separate channels, being separately amplified and played on separate speakers (cases), set up in an equilateral triangle with the listener, to best perform stereo playback. However, a portable small bluetooth speaker can still have separate speakers inside for playing correctly both channels.

Many record companies released stereo “demonstration” records to help promote stereo. These records often included instructions for setting up a stereo system, ‘balancing’ the speakers, and a variety of ambient recordings to show off the stereo effect. When playing back stereo recordings, the best results are obtained by using two identical speakers, in front of and equidistant from the listener, with the listener located on a center line between the two speakers. In effect, an equilateral triangle is formed, with the angle between the two speakers around 60 degrees as seen from the listener’s point of view.

This is a short enough video on speaker positioning.

As mentioned in the chapter „… setting up …“ the positioning of speakers is key. Here is another nice explanation to the setup.

Some correction can be done with the left/right control. Also take care on the hight of the speakers and the direction they point towards.

Sometimes it can be quite impressive to walk around or change positions and realize how the sound changes.