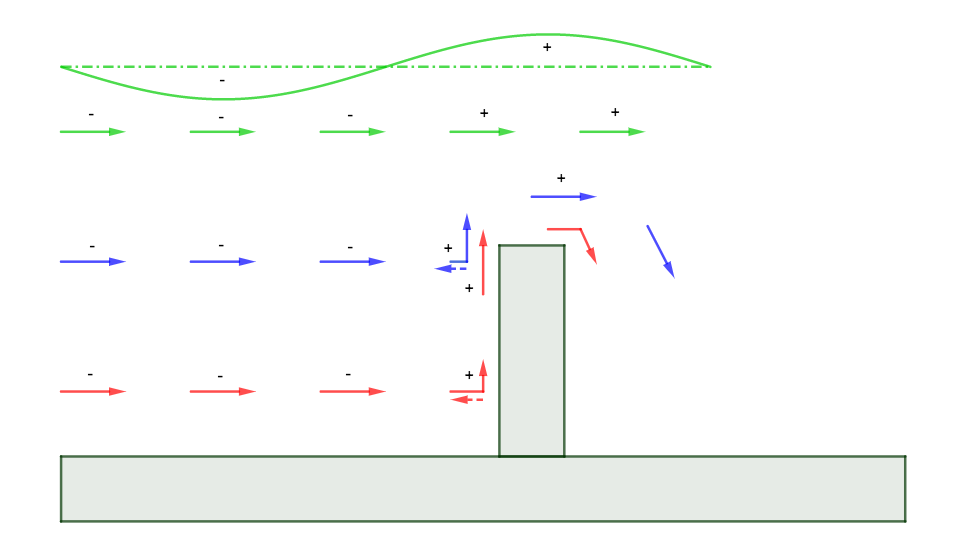 A complex mixture of reflection and diffraction happens to sound that hits an object of similar dimension as the wavelengths of the sound signal. Interestingly, sound waves bend around objects.

The easiest way to describe sound propagation is by comparison with light rays.
But the wavelength of light is far below a millimeter while that of sound ranges from millimeters to meters. Therefore, objects in our daily environment influence sound propagation differently: they both reflect and diffract sound, depending on shape and size relative to the sound signal’s wavelength.

Our consideration starts with a plane wavefront that hits a stiff, heavy and flat wall at normal incidence.
To simplify our discussions as before (Link wavelength), we assume the signal carried by the wave to contain only a single frequency.

A wall that is much larger than the wavelength reflects the wave backwards. At normal incidence, the SPL directly at the wall is twice that of the incoming wavefront. Think of an ocean wave that hits a rocky beach. Such large obstacles compared to the wavelength indeed act like mirrors to the sound. A ray-tracing model covers this perfectly. The angle of incidence is equal to the exit angle.
Obstacles that are very small compared to the wavelength have no influence on wave propagation.

Obstacles with a size similar to the wavelength show a much more complicated impact on wave propagation.
Let us take a closer look at our assumed plane wavefront. As we know, the signal is carried by sinusoidal varying deviations from atmospheric pressure, traveling forward with sound velocity. The distance between locations with positive and negative pressure deviation maxima is a half wavelength along the dispersion path.

A very simplified model of diffraction

Now we place a small vertikal wall, like a noise barrier from floor to a certain height „h“, in the propagation path.
And watch three different sound paths red, blue and green.
When the blue path hits the wall, it causes a pressure buildup directly at the wall and partially reflects back. The local pressure at the wall is higher than above, where the green passes the wall unimpeded. Therefore, some pressure will also expand vertically and „bend“ the wave’s blue path upwards.

Similar to that, the red path energy is to some part reflected back and causes an even higher pressure buildup at the wall. Due to this, it also travels upwards. Since the travel of sound is always at (nearly) constant velocity, regardless of direction, red arrives delayed compared to blue on it’s way towards the edge of the wall.
If „h“ < = 1/4 wavelength, this delay will have little effect and most of the sound energy is bent around the wall.
If „h“ > = 1/2 wavelength , the delayed red path signal cancels with incoming negative pressure on the blue path, and less sound energy is bent around the wall.

Bending into the shadow of the wall

We assume the wall to transfer no sound itself. Hence, similar to the upward bending in front of the wall, there is again a downward bending behind the wall. The wave bends around the wall.
Similar to this bending effect, sound diffracts behind a slit in a wall into shadow areas.

We lift that wall from the floor and double it’s height „h“, to achieve similar bending above and below the wall.
This resembles any object of similar extension perpendicular to the wave propagation.
According to above consideration it is now obvious that such an obstacles influences sound propagation according to it’s size relative to the wavelength. Frequencies with wavelengths much larger than the object will pass unimpeded. Higher frequencies with smaller wavelengths will be influenced, reflected and diffracted.
Very high frequencies with short wavelengths produce diffuse reflexions on a rough or curved surface.

By the above we neglected another important phenomen: absorption. I will cover this in a separate blog.

And of course reality is much more complex than our simple model. If you like to investigate further, there is a nice wikipedia article about diffraction.